A little about myself and this site

From the beginning, I always wanted certain things and the only way to have them (other than just dreaming about them) was to create them myself by building them.

As I have grown older, I've gained a lot of knowledge, and I have really been blessed. I haven't always done things the "right" way, and I've done a lot of stupid things too, but I've always tried to keep doing different things and pressing on.

Starting out in 1967, I found that I wanted to learn to be a trim carpenter. After training with several older carpenters as a helper, I became accomplished enough, and four years later I got a taste of subcontracting. I started out on my own.

It has never been easy to keep a steady income in this career, seeming always to be overworked and underpaid. Even knowing how to estimate the job and make a profit - that's part of the learning and the knowledge gained.

In the early 1980's, my wife took a full time position so we could purchase land with the dream to build a house. We took photos to document our dream, and this will be one of the project galleries we'll be adding in the near future.

During and after the house was built, I always had to keep my own trucks and cars serviced, to afford our new house. We also had a teenage son and daughter to keep us always on the go, whether be it teenage problems, or trying to provide wheels for them. In the midst of it all, I tried to restore a '66 Chevy truck. This is where the love of working on vehicles got into my blood (this is another project we documented with photos that we plan to add to this site in the future).

None of this would have been possible without the help of my partner in life. My loving wife, who has always stood beside me in the rough times as well as the good. Her name is Linda. We met at a local skating rink in Pennsylvania, the same place where all my siblings met their spouses. It was a small community, and that was the place to go for recreation and fun, and of course, meeting people. 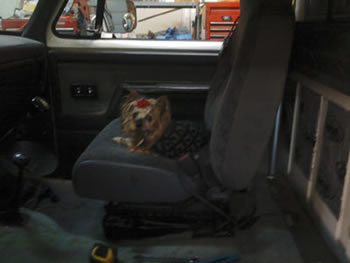 Our first camping trip was in a van I had bought new for the business (1974). It was just my wife and I, off to the C.N.E. in Canada. This is where we got hooked on camping, a place to sleep and stay cheap. At this time, we we still lived in the Tri-State area of Pennsylvania, Ohio and West Virginia. We decided to move to Tennessee to be close to my wife's brother in 1976, and we took even more interest in camping when our children were still small.

We "rented" a small pop up camper. After a few times of using this type of camper, and going through a hard thunderstorm at Dale Hollow Lake, we decided to find one with a hard top. Locating an older 19 ft. single axle Fireball, we remodeled it and used it for a couple of seasons.

In 1990, wanting more room, we bought a 29 ft. travel trailer (Citation). By this time the kids were grown and doing their own things. This was after our first house was built (1987). Our first long trip was to the Tampa-Kissimee Florida area. When we left Nashville, Tennessee, it was 13 degrees above 0. When we arrived in Kissimee it was around 78 degrees - we were hooked!

Anyway, in 1992 we sold our first house for economic reasons. When we found and secured the lot for our next house, we decided to live in our travel trailer while we built our next house. The trailer soon became small, so we decided to go shopping for another RV. We moved up to a 33½ ft. fifth wheel, with more room, but also more weight to pull. We pulled this for about 6 years with our ¾-ton pickup, the same one I worked out of during the week. At first I thought this would be great, but after spending a day each time cleaning all the tools and so forth out of the truck, and some wear on the transmission (10 yrs. old at this point), it was time to think about some other method of pulling our RV. We were fueling up at a fuel stop in Kentucky after a trip home to Pennsylvania and met a man with a delivery box truck. He told me that it was equipped with the same Cummins engine that my Dodge had. That made me start thinking about some of the FL70 trucks that were on the road. What we wanted to end up with was way out of our reach money-wise. You know the old saying, champagne taste and a beer pocket book.

So to rationalize our dilemma, I started thinking about trying to convert one of these trucks. I went to the local dealership (Neely Coble Nashville) and started crawling all over these trucks to see how they were put together. Luckily they were made of steel and not aluminum or fiberglass.

I studied these trucks and made mention to everyone I spoke to about my ideas, but everyone just shrugged it off. I mean, I had never done anything like this. I had purchased a Mig welder Miller 172 a year or two earlier, and now I would get a chance to use it big time.

After finding a 98 model FL70 cab and chassis at Select Trucks Nashville, I made arrangements to purchase the truck. As long as the GVW was under 33,000 lbs. there was no need for a CDL license. I planned only to haul the RV with it, so this was perfect. Who knows what else I could or would want to haul with it.

Let me tell you that although the pictures show a lot of progress throughout the process, it didn't come without a lot of negative times. I had to overcome a lot of obstacles at every turn. First of all, everything I did was all new to me. Where should I start, where should I cut, how should I fabricate? The only thing I knew was that if we were going to afford this truck, it was all on my shoulders. I dug deep within myself to find the strength and stamina to do this. When you have something overwhelming, the old saying is, "How do you eat a whale? One bite at a time." That was how I had to tackle it.

I worked on this project in the early morning hours after my wife left for work (4:20 AM) until I time for me to get ready to go to work, and also on the weekends. I made several trips to Neely Coble to take measurements on every detail of how these trucks were fitted together. It's amazing how much you can overlook without paying attention to each detail.

The truck has some interior work to be finished on it, so I will probably take a little time off and not be as rushed to try and meet deadlines that I set for myself. I'm not much for electrical wiring, (but) this is just another one of those obstacles one must overcome. On the list of the things to do is power door locks, hopefully this year. Then the power windows next year. Last, but not least, will be changing from a 6-speed standard transmission to an Allison automatic. One thing that you won't find very much of in my vocabulary is the word "no" or "I can't."

And with the help of a good friend and expert body man, I have just finished going through my '90 model Dodge, stripping and repainting it. This was after cutting the roof off and replacing it with another one because of the rust that developed from a leaking sunvisor. This should be on my website shortly, from the talented help of my daughter Melissa. She has been working and laying it out, making changes, all in her spare time. If it weren't for Melissa, we would still be in the dark about computers.

Thanks for visiting!
Keith

If you have questions or comments, drop me a line at keith@backyarddiyguy.com.